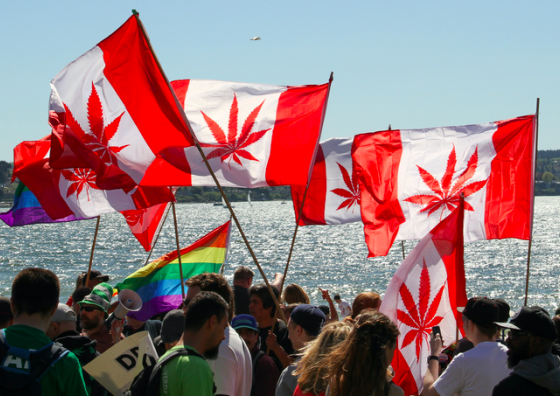 Spread the love
Legalization of recreational marijuana is officially incoming. While we’ve known this for some time, the process just took a massive leap forward.  On Monday night, the House of Commons passed Bill C-45 by an insane margin of 200-82. This is the bill that will legalize recreational marijuana all over Canada. After the vote, Prime Minister Trudeau tweeted “We’re one step closer to legalizing & regulating marijuana. #BillC45 means less money for organized crime and harder access for our kids…” While the Senate still has to pass the legislation, the weed train doesn’t seem like its running out of steam. Let’s dig into what this will mean for all of our fellow stoners out there.

What’s Will Be Legal?

Everyone knows there’s always loopholes and catches. In something as complicated as the legalization process, it will be important to know the finer points of what this will mean. Let’s start with the basics. C-45 would do the following. Each providence would be allowed to regulate and control the sale of the dried weed and oil. The sale of edibles is not included in this bill, but an amendment add them to the bill has passed the committee. Expect the options in terms of product to start out sparse, but expand as the government allows more and more. Currently, where you will be allowed to smoke is a little unclear. The current bill seems to allow for marijuana to be smoked in the same areas that tobacco is, but it is unclear if that will remain. Some organizations are pushing for much stricter limits on where it can be smoked. The bill also adds a number of penalties for illegal activities that we will touch upon later.

Let’s look at what each providence is planning for in terms of legalization efforts to get a better sense of how it might affect you: British Columbia: There are no released regulations, but the minimum drinking age is 19. B.C. is expected to use its “hybrid model” already used in alcohol. This model would allow the sale of marijuana through both provincially-owned and private stores. Alberta: The legal age is begin set at 18, which is the same as the minimum drinking age. Privately owned liquor stores will be allowed to operate under regulation, while the government will control online sales. There is also some planned restriction on where you can smoke, including possible bans on smoking in hospitals, Saskatchewan: Expect plans to be released sometime in the next few months. Manitoba: No legal age has been decided yet. There are plans for privately-owned stores to be operated through government tracking and distribution of supply. Ontario: The legal age will be set at 19. Work has already begun on the process of setting up provincially-owned stores and closing all current illegal operations. Quebec: The age will be 18, which is the same for alcohol there. A government owned corporation will be in control of the sale of recreational marijuana. Unfortunately, Quebec is planning to ban home growing ops. New Brunswick: Plans to set the minimum age at 19, which is the same as alcohol there. They are planning to set up provincially owned stores in the same way that they do with liquor as well. A proposed bill would allow growing, but only in a locked away room and not in the open. Nova Scotia: Has not released plans, but they are expected by the end of the year. Prince Edward Island: Input has been taken in from various interested parties with an eye towards releasing legislation in Spring 2018. Newfoundland and Labrador: Plans are in motion to set the minimum legal age at 19, which is the same as it is to buy liquor. The government will handle distributing marijuana to approved privately owned shops. The province plans to set up an online shop and possibly physical locations down the road. Yukon: They will be setting up the legal age at 19. The same as alcohol. Unfortunately, there are only plans for one physical recreational marijuana dispensary to be set up in the territory. Instead, the government plans to rely on the sales on online businesses for most cannabis needs. Northwest Territories: The minimum legal age is planned for 19, the same as alcohol. It will be up to each community to decide whether or not to allow marijuana. The government plans to add cannabis to the liquor stores scattered throughout the territories. Online services will also be available. Nunavut: No plans have been released yet.

We’re not here to put a damper on anyone’s parade, but there are some concerns with what will happen now. The main issue is that most governments plan to put significantly stricter penalties on the illegal sale and use of marijuana. For instance, Quebec and Ontario have indicated that they plan to strengthen the punishments. The legalization bill also has a number of added penalties towards that end. Selling weed without a license, possession of large amounts, and selling and buying illegal products can lead to tough punishment including imprisonment. Also, much like alcohol, selling marijuana to a minor comes with very stiff penalties that can lead to imprisonment as well. At issue is the fact that the government doesn’t want to seem “weak on crime.” Even look at the tweet we mentioned earlier from Prime Minister Trudeau. The government sees this as a way to control the flow of drugs, which is fine, but there is some fear that this will lead to some legal loopholes, especially early on, when all the kinds aren’t worked out yet.

We don’t know that the marijuana landscape will look like a year from now, but it’s becoming increasingly likely that it will be legal. The senate still has to clear it and the regulations still will need to get worked out. There are certainly issues with the transition from illegal to legal, but that should be outweighed by the positives. We will have to wait and see. Until then, stay stoned and out of trouble!